Written by Katie on November 5, 2021. Posted in Latest News

It’s that time of year again to celebrate the people who make a difference in our sport, recognize outstanding achievements and celebrate the success of our members!

Water Ski and Wakeboard Canada believe in supporting excellence by recognizing exceptional performances of our athletes, coaches, officials, and volunteers.

The objectives of  these awards are:

The award categories are:

Please Note:
*Wake awards will be administered by the Wake Committee at a later date
** The Province of the Year award will not be recognized this year.

NOTE: Nominations are kept confidential and only reviewed by Water Ski and Wakeboard Canada and Selection Committee members.

Congratulations again to the 2020 recipients 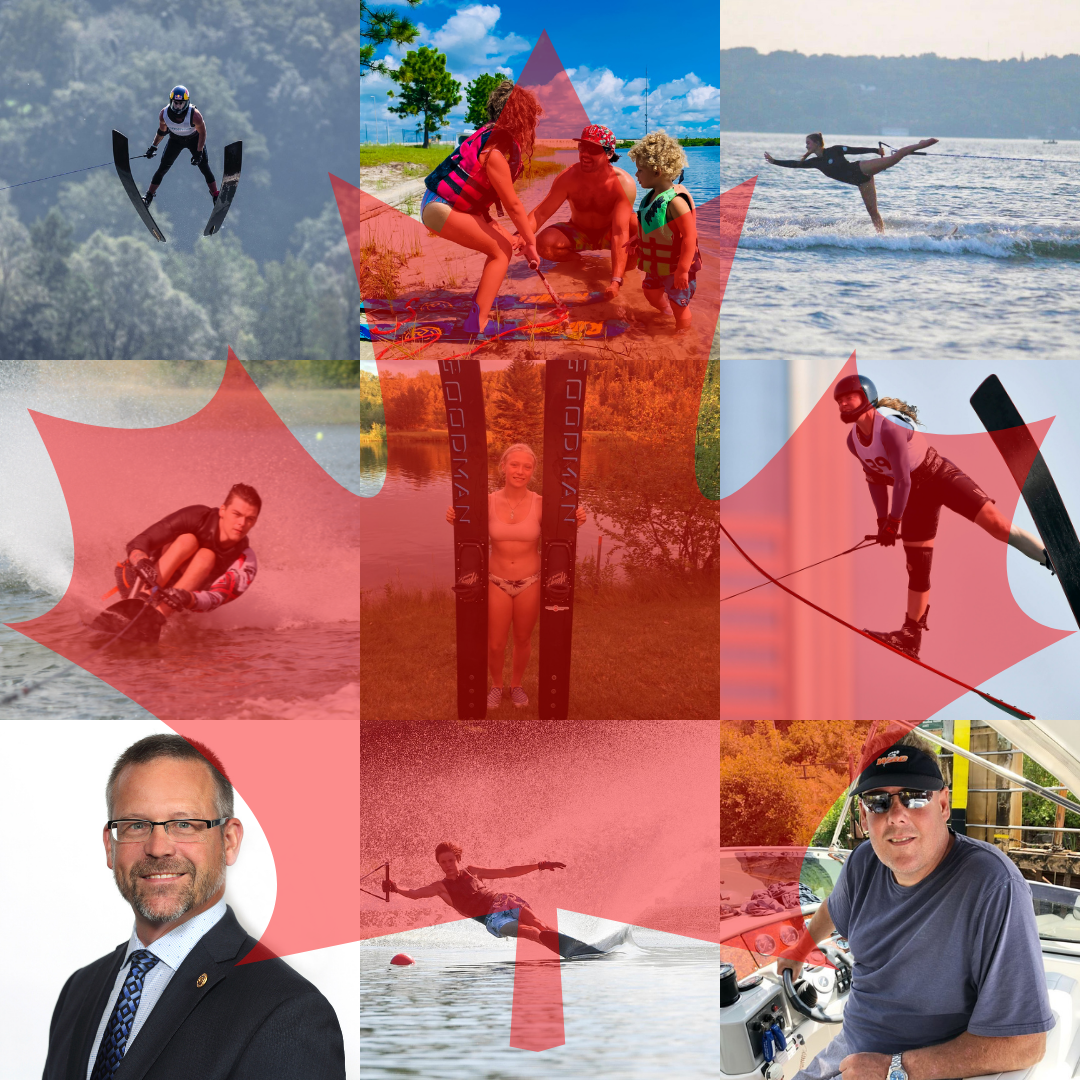 Water Ski and Wakeboard Canada (WSWC) are pleased to announce the 2020 annual award recipients. Although 2020 looked different for everyone and as a community we were not able to engage on the water like we are used to, WSWC felt it was important to celebrate and honour our athletes, coaches, officials and volunteers for all their hard work – especially in a COVID year!

The WSWC Annual Awards celebrate the people who make a difference in our sport, recognize outstanding achievements and celebrate the success of our members!

Water Ski and Wakeboard Canada are pleased to celebrate the following individuals by recognizing the exceptional performances of our athletes, coaches, officials, and volunteers. 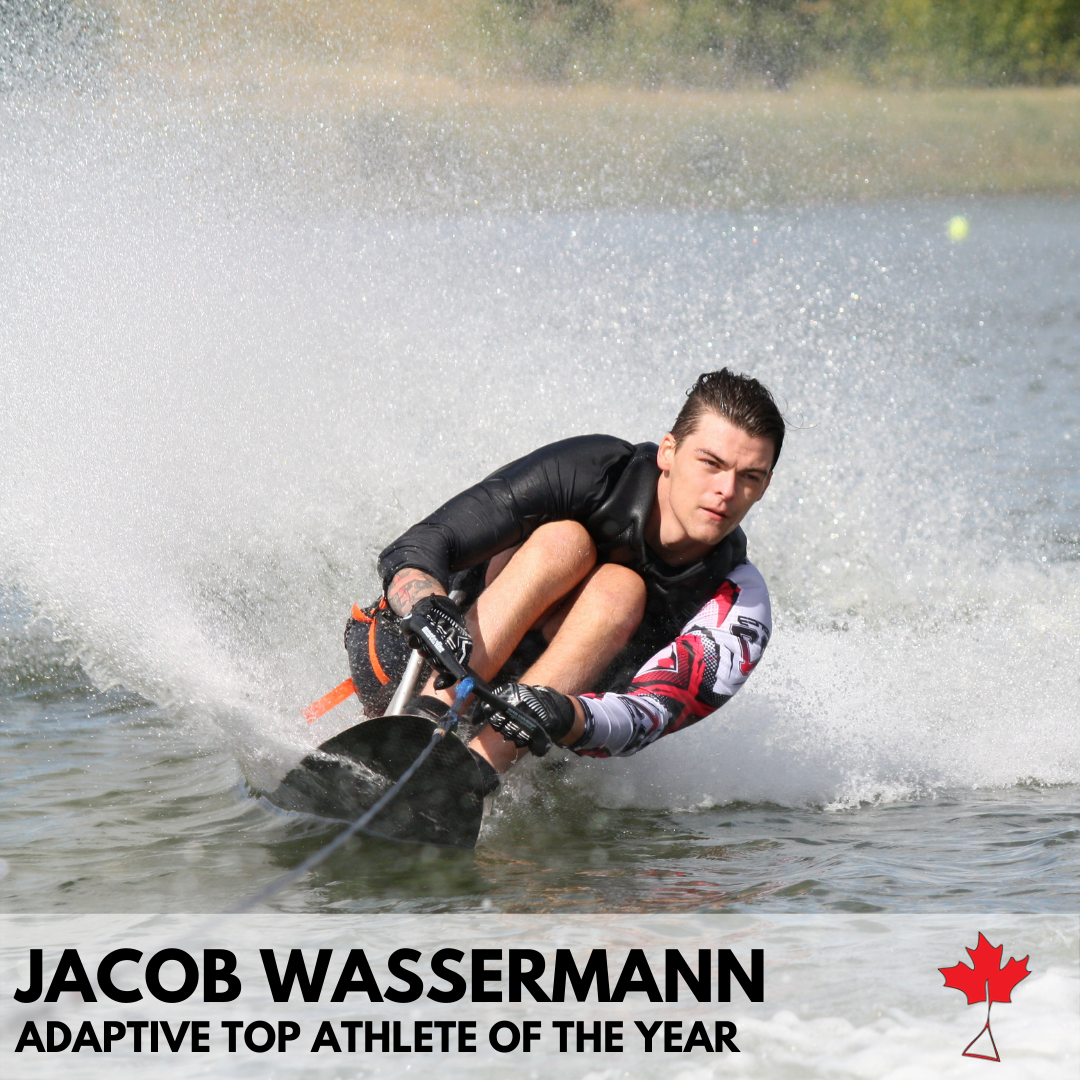 Jacob Wassermann was injured in 2018, at the age of 18, in the Humboldt Broncos bus crash. Just 4 months after his injury, he was introduced to Adaptive water skiing and instantly fell in love with the sport, finding a new place where he belongs. He travelled to his first World Championships in Norway in summer of 2019. Jacob’s first competition was Waterski Wakeboard Saskatchewan’s Provincial Tournament on August 17th, 2019. He landed his first jump shortly after the tournament, making jumping his favourite event in adaptive water skiing. Training in 2020 looked a little different but the pandemic did not stop Jacob from working every day to improve his skiing and progressively become a stronger athlete both on and off the water. He never missed a day on the water or in the gym as he trains for his next competition. Jacob’s goals for the future are to be a gold medalist at the World Championships. He hopes to be a key part in bringing Canada to a medaling position as a team.

“Jacob is a really committed athlete that shows great maturity and leadership beyond his years. I am confident that Jacob will achieve his goal of medaling at the Worlds and bringing a team medal home to Canada. He is an amazing addition to our Adaptive National Team and his contributions on and off the water will really help grow our National program” said Adaptive National Team Coach David Wassill 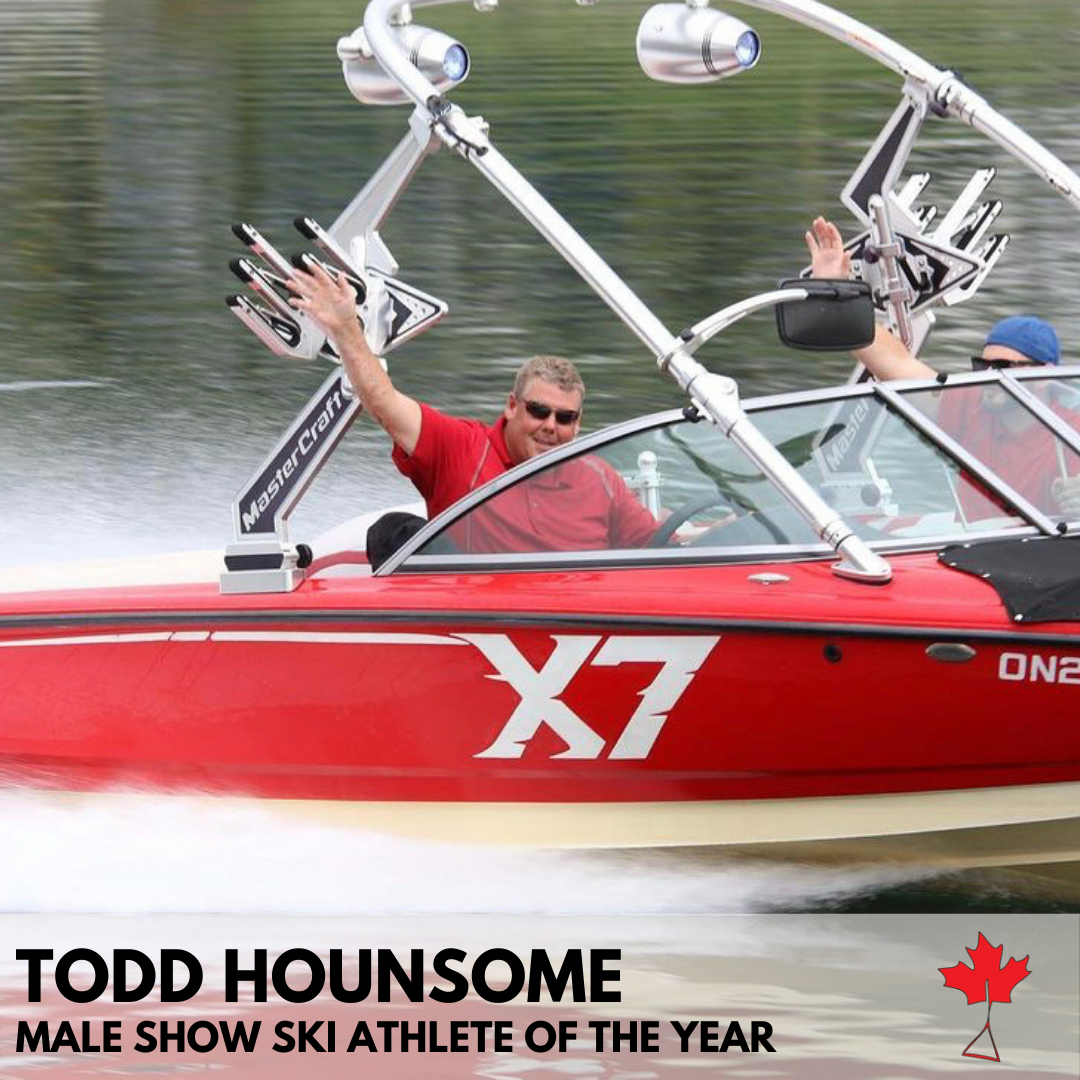 In a year when tournaments were interrupted and show time on the water was at a premium, Todd Hounsome stood out both as a leader and as a world-class Show Ski driver.

Todd truly stands out in his capacity as a show ski driver, mentor and coach.  He drove flawlessly for literally every ski show that occurred in 2020. In his role with Show Ski Canada, Todd was an athlete, coach, accountant, travel agent and logistics coordinator, who made things not only possible, but easy for those making the trip to the 2020 IWWF World Show Ski Tournament in Australia.

Todd continues to grow the sport of show ski by sharing his passion (and time behind the wheel) and encouraging young athletes to be a part of this unique sport. Todd is a very deserving winner of Show Ski Athlete of the Year. 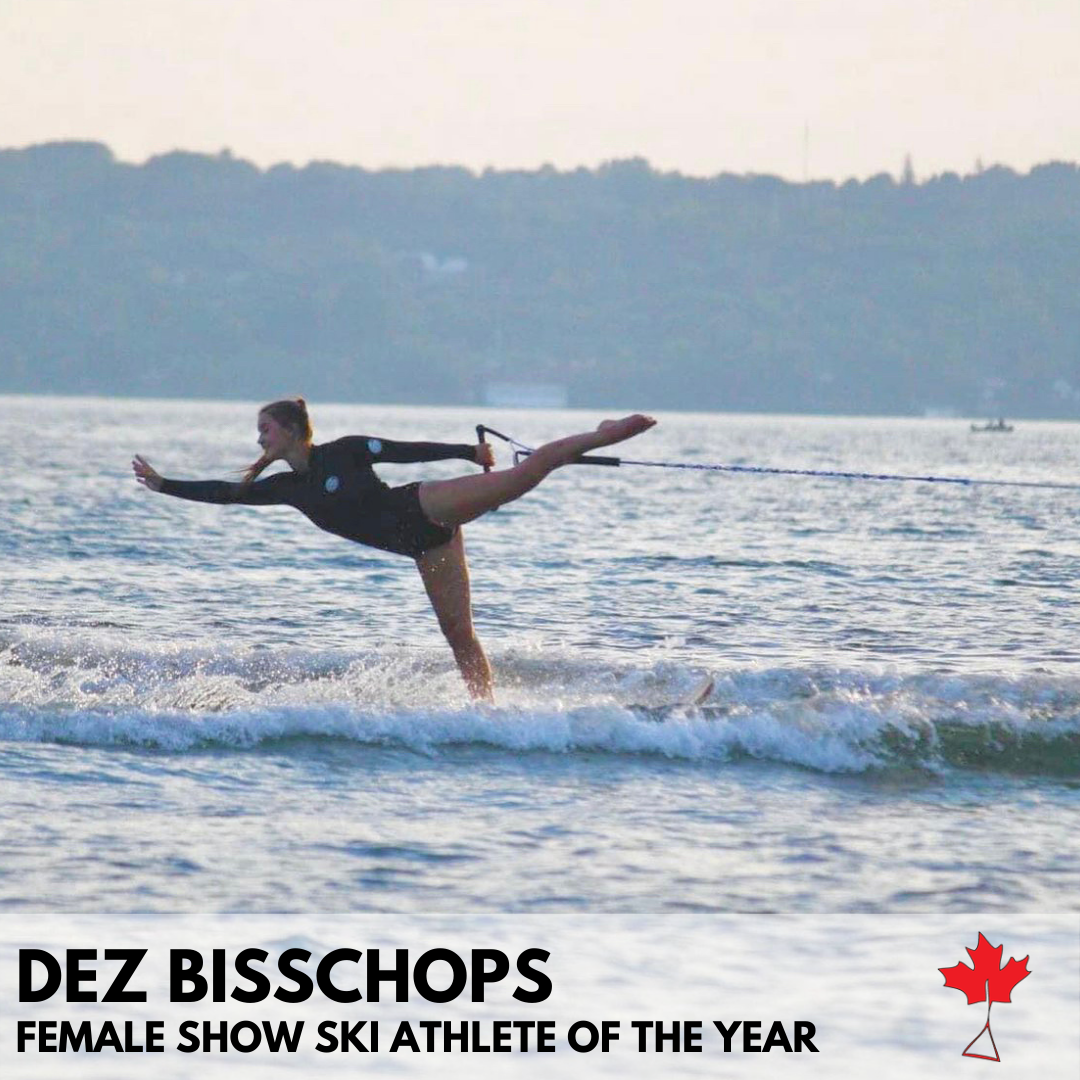 Dez is an outstanding all-round athlete and was a great addition to Team Canada set to compete at the 2020 IWWF World Waterski Show Tournament in Australia. For the World Tournament Dez was to appear in every single Act featuring a female water skier including an Act new to Team Canada being that of a Trio with a gymnastics bar around which she rotates while the bar is held by skiers.

Prior to becoming a water-skier, Dez was a gymnast who competed at a high level. She started show-skiing in shows at Fern Resort at the age of 13 using her gymnastics skills to perform strap doubles and climb pyramids while she learned to swivel. She eventually retired from competing in gymnastics which allows her to focus on her love for show-skiing.

Dez was a member of Team Canada 2018 and competed at the 2018 IWWF World Waterski Show Tournament in her home province of Ontario. Dez also performed at the 2017 and 2018 CNE water ski shows in Toronto, Ontario. Becoming such an accomplished show skier in such a short time is even more impressive because Dez is 16 years old. 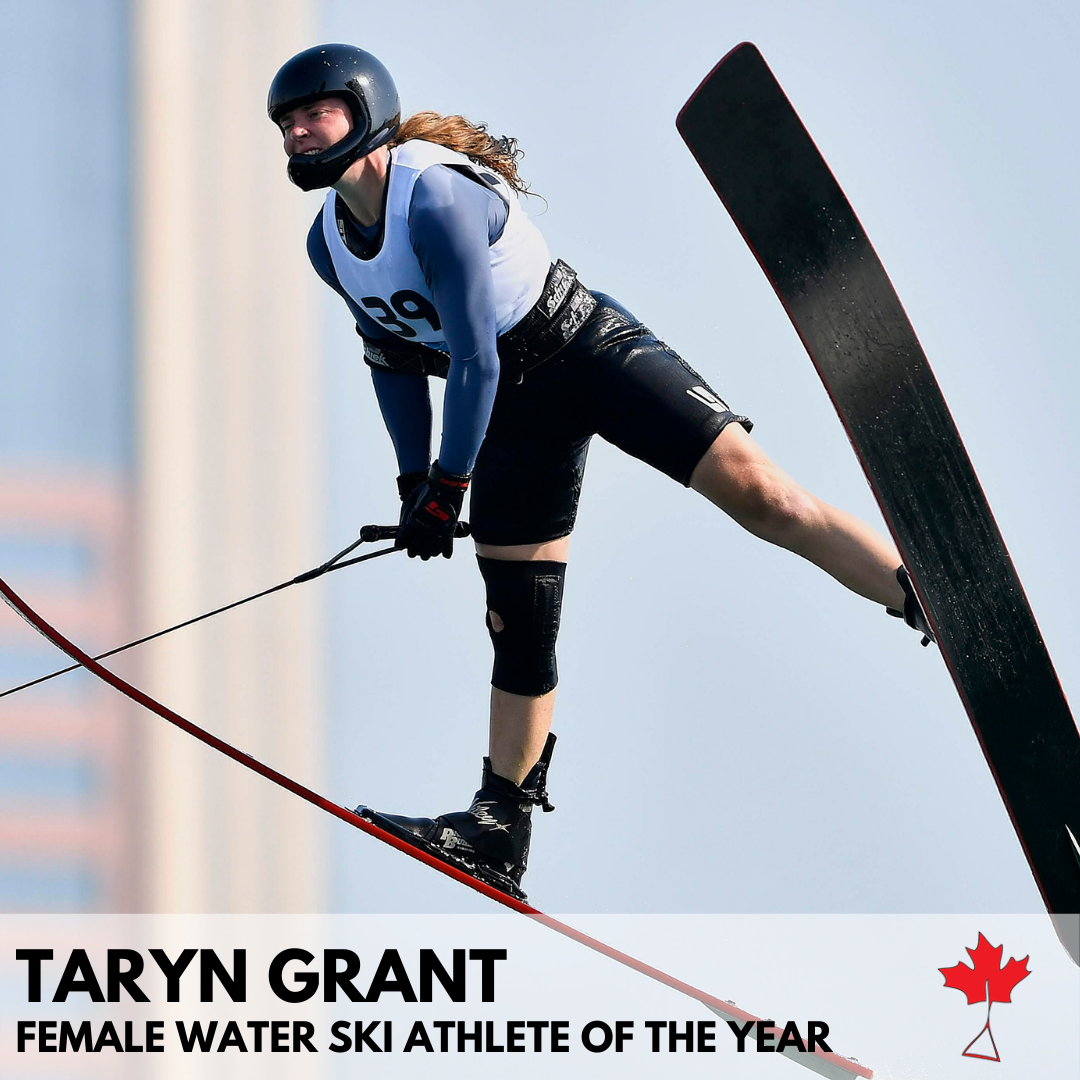 In 2020, Taryn set a new Canadian Open Women’s Jump record of 53.2 meters. Taryn is currently ranked 5th on the World Ranking List. Taryn has continued to push herself year over year, and it is no shock that this elite athlete has been recognized as Female Athlete of the Year. We are so proud of you Taryn! 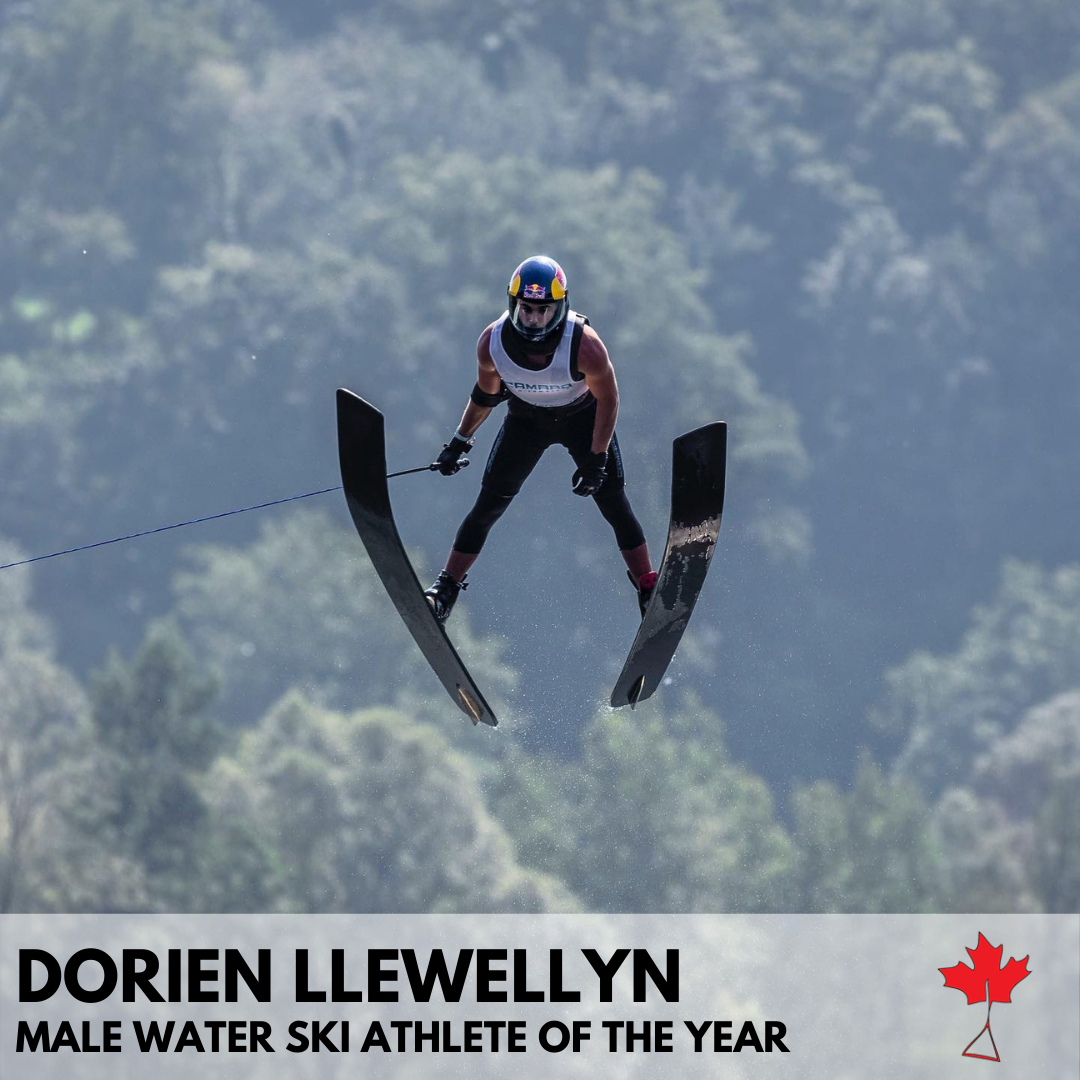 In 2020, Dorien moved to the no.1 position on the World Ranking list in the Open division in Overall. He also improved his ranking in tricks and is currently in the 6th spot in Open Men’s Jump. Congratulations Dorien! 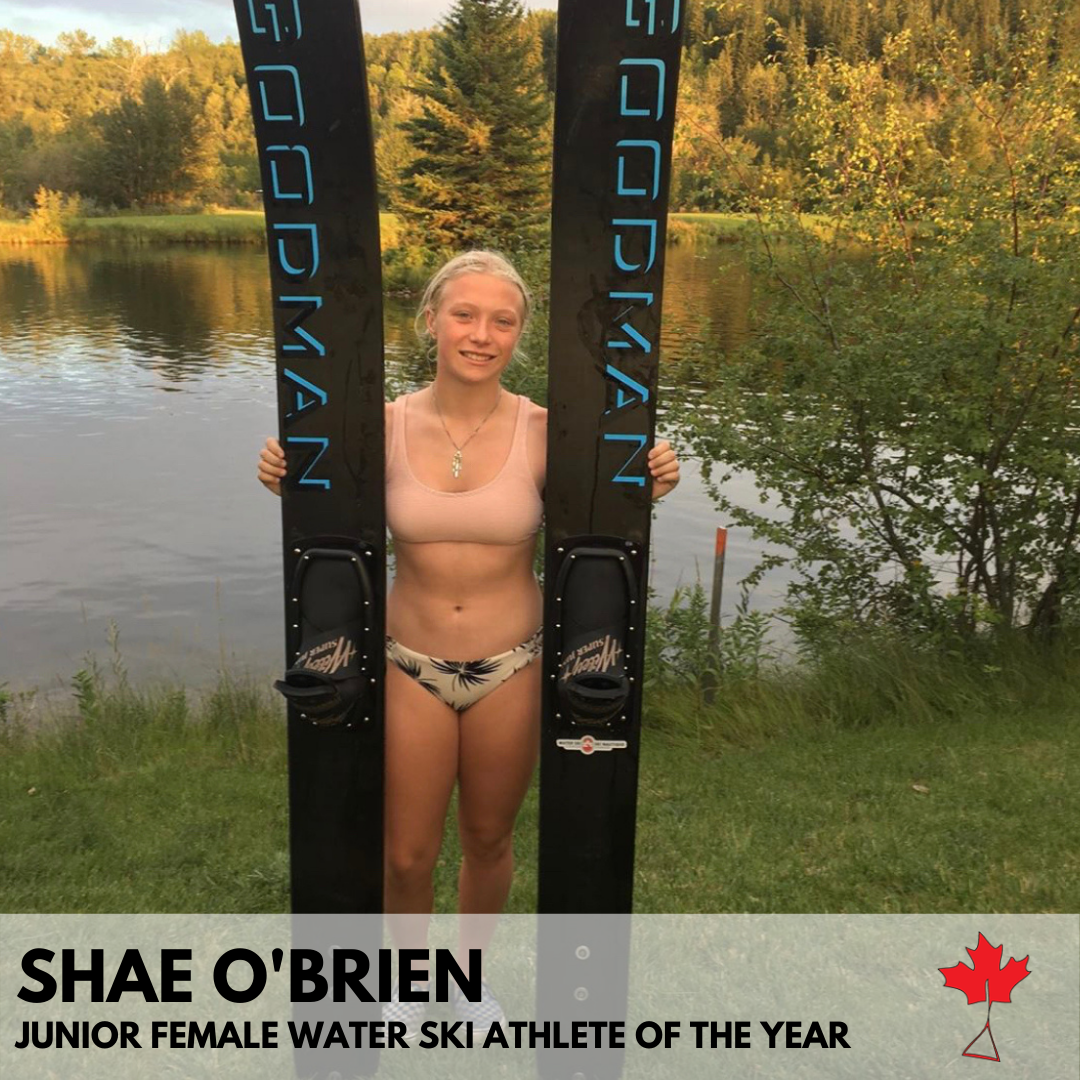 Shae set a Canadian jumper in the Girls U-14 division with a leap of 34.7 meters. She is also currently ranked No.1 on the U-17 World Ranking List. Congratulations Shae! 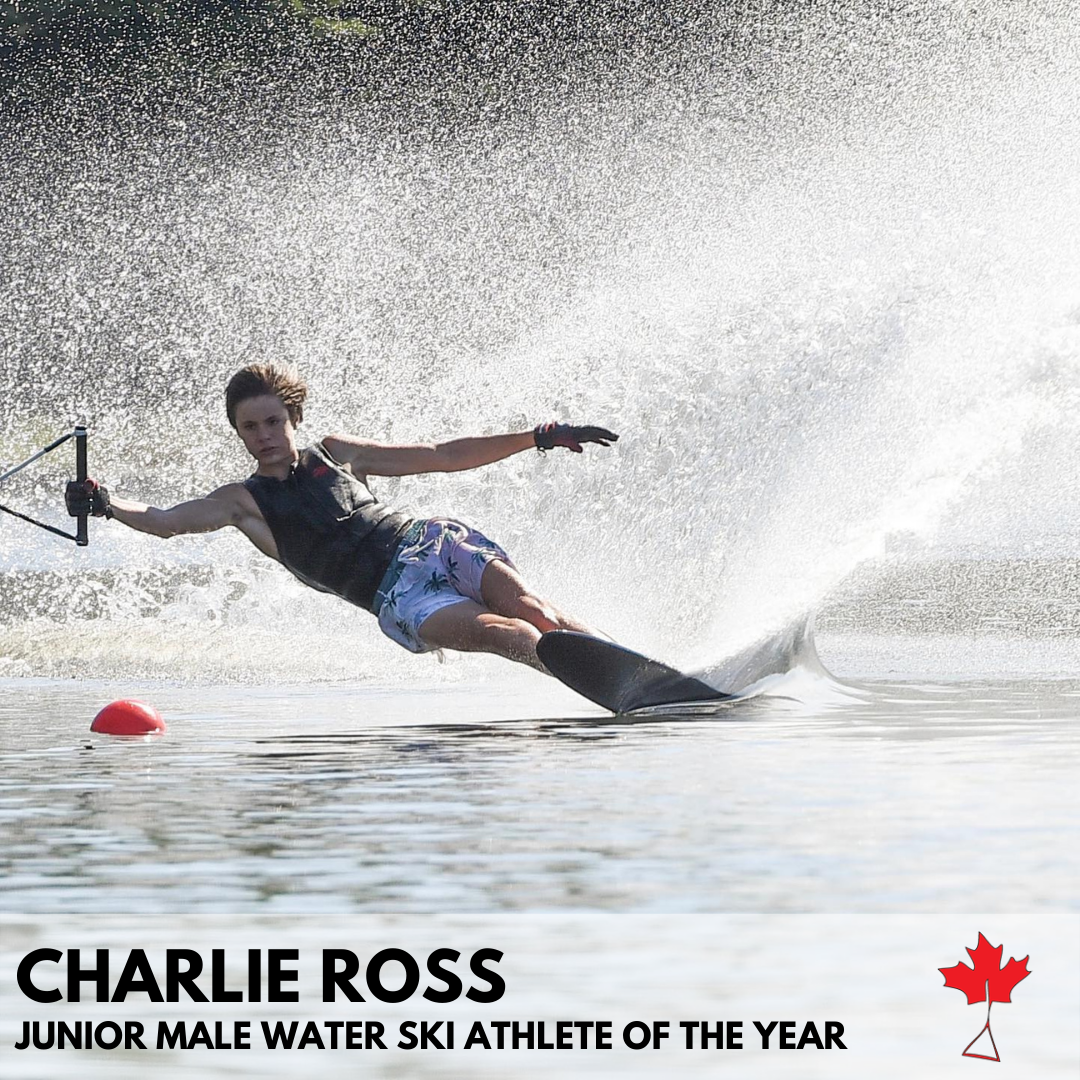 Charlie set a new Canadian slalom record in the boys U-17 division scoring 4 buoys at the 10.75 M.line. He is currently ranked No.1 on the U-17 World Rank List. Congratulations Charlie! 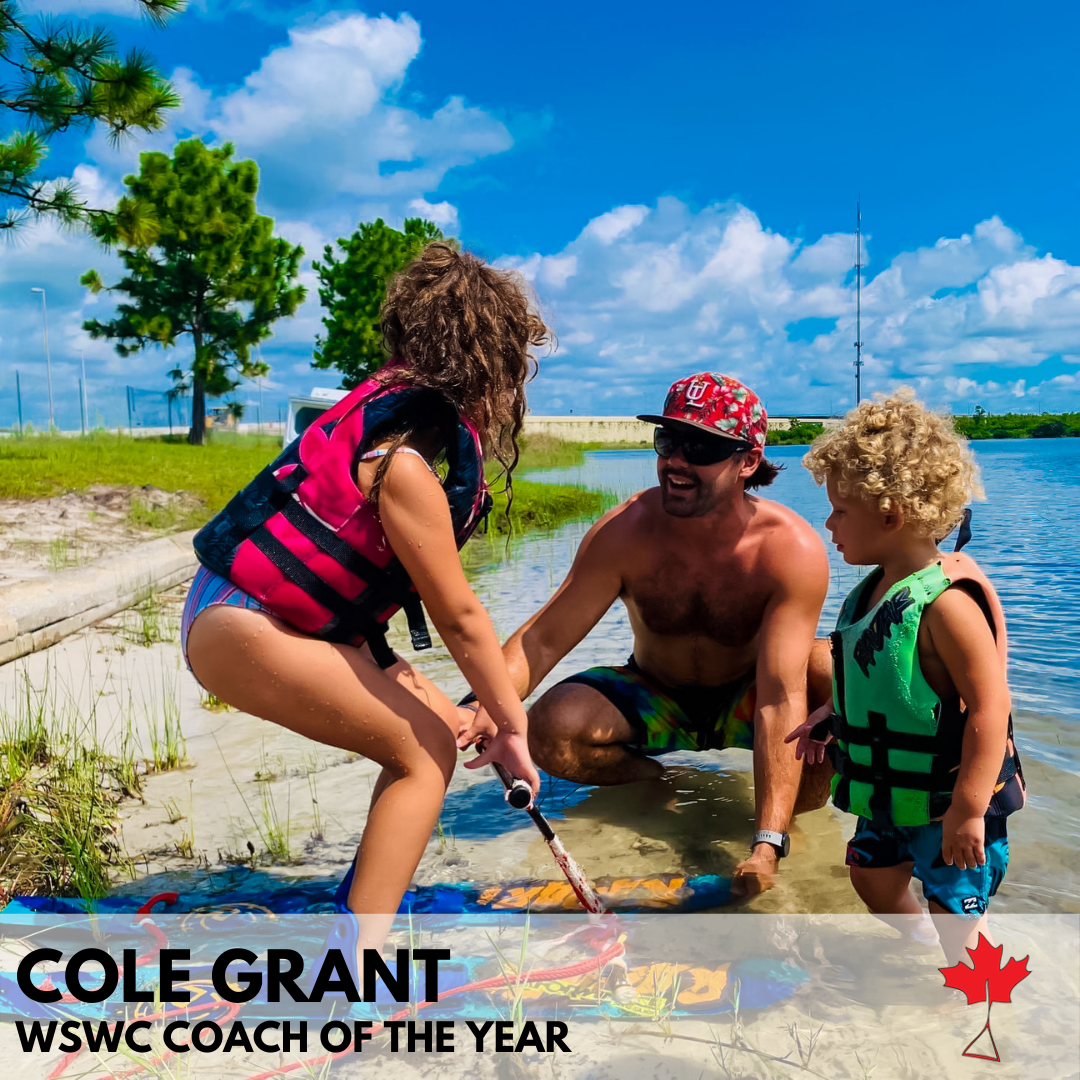 During the pandemic, Cole has managed to continue working with several of the next generation Canadian junior skiers and has been preparing them for 2021 international events. He works tirelessly on and off the water developing skills and instilling confidence in Water Ski Canada’s young skiers. He is currently enrolled in a coaching diploma program which confirms his level of commitment to coaching. 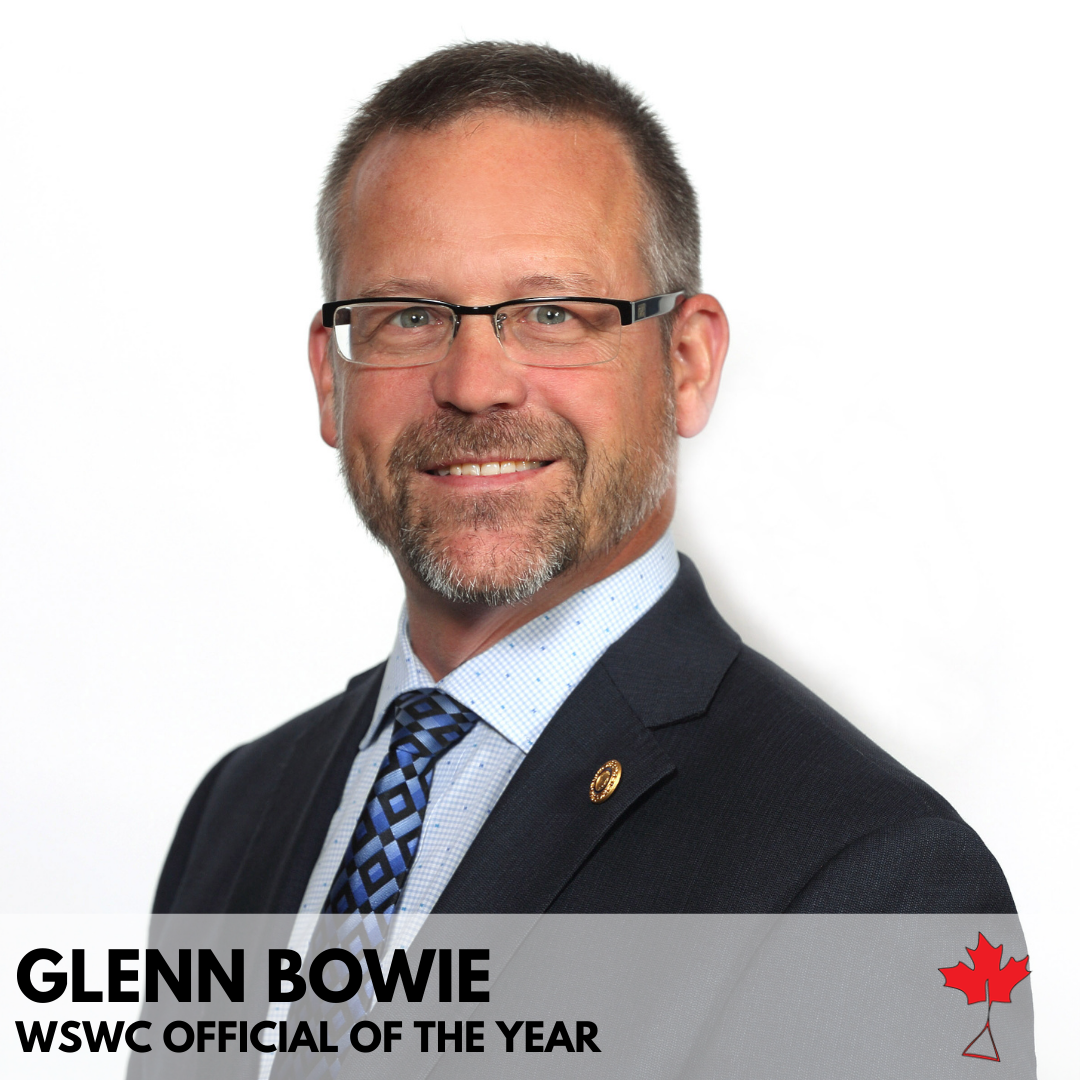 This year’s Official of the Year never steps back or hesitates when asked to officiate. Glenn has and continues to pass on his love for the sport to the next generation of athletes and officials. He can be found at any and every tournament in Nova Scotia and often (pre pandemic) at most National events officiating. He is a compassionate official, still working his teachings into his officiating whether it is training new officials or always being a positive influence to athletes in the water in ways they can do ever better next time. He is always there to officiate no matter the weekend and is a true asset to the competitive side of our sport in both Nova Scotia and Canada! Glenn currently sits on the WSWC Adaptive Council, Water Ski Canada’s Officials Committee, is the chair of the Water Ski Canada Council and Canada’s representative on the International Water Ski & Wakeboard Federations Disabled Council. 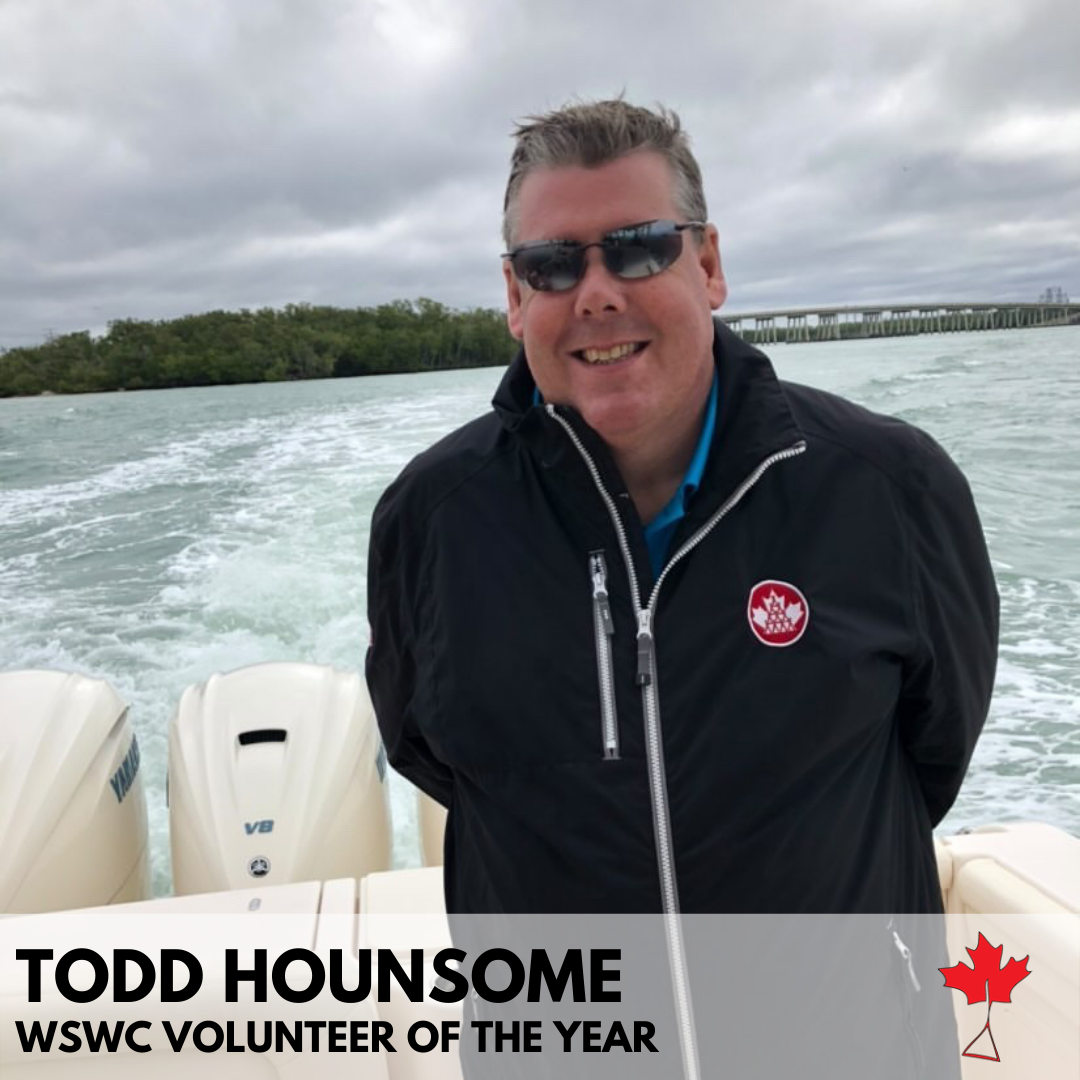 Todd has been instrumental in the growth of show skiing in Canada and was one of the driving forces behind both the 2018 and 2020 Show Ski World Championships. Todd has volunteered many hours to Show Ski Canada’s Council and continues to help deliver a high quality program to both returning and new show ski athletes. Thank you for all your hard work Todd!

Congratulations to the 2020 Award Recipients!