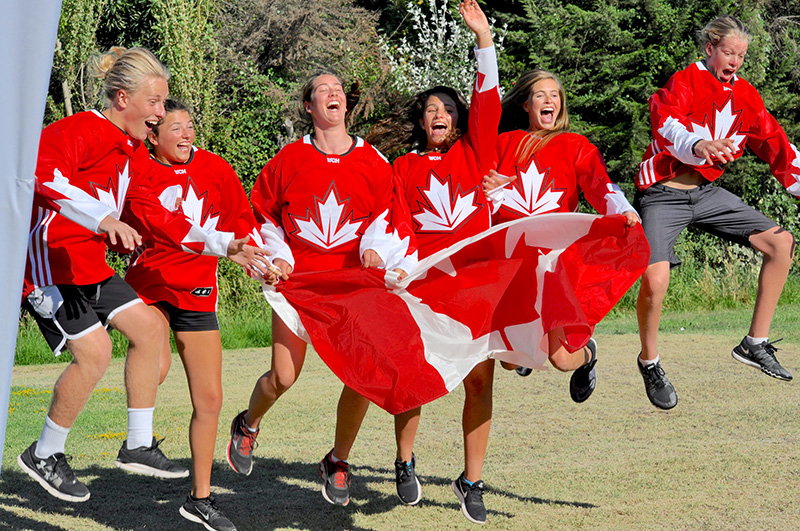 OTTAWA, ON – Water Ski and Wakeboard Canada is pleased to congratulate our Canadian athletes, finishing with 5 medals en route to the ultimate goal of the Team Gold Medal at the Junior Worlds Water Ski Championships in Lago los Morros, Chile, January 5-8, 2017.

With 91 athletes from 21 countries, the Canadian team dominated on the water, capturing the highly coveted Team gold medal.

Jaimee Bull (CAN) captured the Jr. World Slalom title with an incredible score of 4 buoys on the 11.25m line, Brooke Baldwin (USA) took Silver (3@11.25m) and Neilly Ross (CAN) took home bronze just two buoys behind (2 buoys at 11.25m). Paige Rini (CAN) finished only one half a buoy behind Neilly, yet the highly competitive girls’ division would push Paige back to 6th place.

In Tricks, Anna Gay (USA) won Gold, Neilly Ross (CAN) captured silver, astonishing all with a score of 10,050 in both the Prelims, a Jr. World Record at the time, and in the Finals. Neilly has continually proven herself not only to be the most consistent trick skier in Canada, but also internationally in Women’s tricks.

In Jump, Canada swept the gold medals in both Girls and Boys.  Dominique Grondin Allard (CAN) took the spotlight in the Prelims with a new pending World Record of 46.0m and then went on to take Gold in the Finals with 45.1m; with Paige Rini (CAN) posting a personal best and finishing 12th.

In the Boys Finals, Conley Pinette (CAN), with a leading score of 58.0m in the Prelims and 55.9m was enough in the Finals to give him a well-deserved Gold; with Thomas Diagle (CAN) finishing 9th.

Thomas Daigle finished the tournament with three personal bests and Paige Rini with an unfortunate fall in Trick would have been a dominating factor with her other two scores in the overall competition.

While the top three Teams showed strength in depth, Team Gold went to Canada with dominant performances in Jump. Canada won the gold medal with 7,616.36 points, France earned the silver medal with 7,472.47 points and Great Britain earned the bronze medal with 7,406.40 points.

“I am truly proud of how our athletes performed” says National Team Head Coach Steve Bush. This is a special team and I am so proud of their accomplishments both on and off the water.”

For more info and photos go to https://wswc.ca/waterskicanada.ca and follow us on social media

About Water Ski and Wakeboard Canada

Water Ski and Wakeboard Canada (WSWC) is the governing body for towed water sports in Canada.  WSWC includes over 24,000 members and over 1,000,000 participants get on the water each year in Canada.

For More Information and Interview Requests: